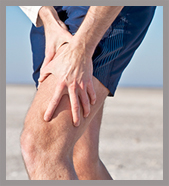 The knee is an extremely complex joint formed by the articulation between the femur (thigh bone) and the tibia (shinbone). A knee cap (patella) is present over the front of the joint to act as a pulley for the quadriceps (thigh) muscle and to help with the transmission of forces from movement into the knee. The femur and tibia/fibula are held together by four strong principal ligaments. Two collateral ligaments are present on either side of the knee and control the side to side movement of the knee. The other two principle ligaments are the anterior and posterior cruciate ligaments (ACL and PCL), which attach in the centre of the knee joint and cross each other to form an ‘X’. The cruciate ligaments control the back and forth movement of the knee and have a complex contribution to the control of rotation of the knee. The ligaments and tendons of the postero-lateral/postero-medial corner, the anterolateral and patello-femoral ligaments also play an important part in the stabilisation of this complex joint.

Knee ligament injuries are common in athletes involved in both contact and non-contact pivoting sports. Knee ligament injuries can be graded, based on the severity of injury. In grade I injuries the ligament is mildly damaged and slightly stretched, but the knee joint is stable. In grade II injuries there is a partial tear of the ligament. In grade III injury there is a complete tear of the ligament and the ligament is divided into two, making the knee joint unstable. The surgical repair of a dysfunctional ligament involves repair or reconstruction of the torn ligament potentially using a tissue graft taken from another part of the body, or from a donor. The damaged ligament is replaced by the graft and fixed to the femur and tibia. Gradually, over a period of several months, the graft heals and becomes integrated into the local tissues.

Following arthroscopic reconstruction of injured ligament/s most athletes will have the aim of returning to their sport after a period of rehabilitation. The outcome and expectation after surgery will depend on the injury and the degree of surgery required.